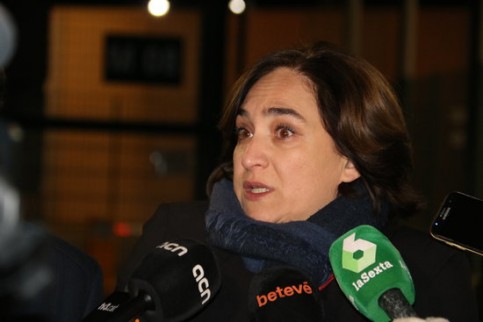 This is not the first time Colau has gone to see those held in the Catalan penitentiary centre, and this visit was to see them before their transfer to Madrid in the coming days in preparation for their trial.

Days before the proceedings begin, Colau stated that it’s necessary to denounce what constitutes ‘a very serious violation of fundamental rights’.

The mayor also urged expressing ‘rejection to a situation to which we should not get used to’, a feeling which she deemed the ‘majority’ of the Catalan population shares.

Leaving the prison, the Barcelona mayor announced that an institutional statement rejecting the ‘unjust’ situation of the jailed leaders will be included at the next local council on 25 January.

The Barcelona mayor has, during Catalonia’s push for independence, positioned herself between blocs: neither for a unilateral declaration of independence, nor in support of Madrid’s measures to stop it.

The nine people are in pre-trial jail for their role in Catalonia’s push for independence. The public prosecutor has requested a joint total 177 years prison sentence, including 25 years for Oriol Junqueras, the highest individual proposed sentence.