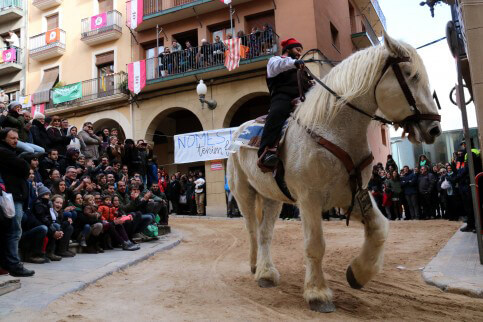 This coming 17 January is the feast day of Sant Antoni Abad, who is celebrated in Catalonia as the patron saint of animals.

Many towns and cities mark the day with traditional parades known as Els Tres Tombs (which literally translates as ‘the three turns’) while local families often bring their pets along for a blessing.

This year, the Barcelona neighbourhood of Sant Andreu de Palomar holds its 92nd Tres Tombs edition; it’s the oldest parade of its kind in the Catalan capital and in 2019 follows a new route.

Taking part are horses and riders, horse-drawn carriages and the lancers of the Guàrdia Urbana; they gather from 10am in the Parc de la Maquinista with the start of the procession itself set for 11.30am and the blessing of animals at 12.15pm.

Another place to see this unique tradition is in the neighbourhood of Sant Antoni, which also holds its festa major (main festival) at this time of year to coincide with Els Tres Tombs.

The festa major runs from 11-20 January and as well as the celebrations for the local saint, there are also appearances by gegants (giants made of papier-mâché who represent historical and fantastical characters and dance through the streets), concerts, activities for kids and the chance to try traditional gastronomy.

Outside Barcelona, towns including Igualada and Valls are renowned for their Tres Tombs festivities. This year Valls is marking its 40th such event, and organisers say it will be one to remember.