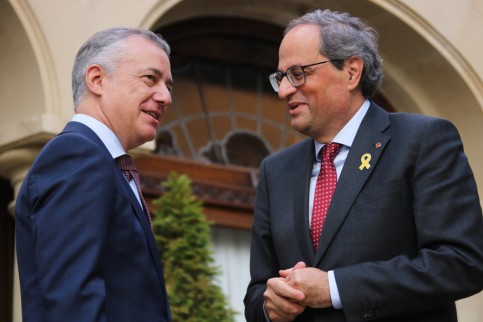 The Basque leader, Íñigo Urkullu, has expressed his support for the nine Catalan leaders in pre-trial jail and has called their situation ‘unfair’.

Talking to the press after a meeting in Vitoria-Gasteiz with his Catalan counterpart, Quim Torra, Urkullu said the politicians and activists behind bars should be freed.

He also backed the Catalan executive’s demands to hold an agreed referendum on self-determination, and pointed out that ‘not only independence’ could be under consideration in such a vote.

The Spanish Prime Minister, Pedro Sánchez, has flatly rejected a vote on independence, but he has on several occasions suggested asking citizens about ‘self-government’, with a view to amending Catalonia’s statute of autonomy, the basic law establishing its relationship with Spain – but always within Spain.

In a joint press conference, Quim Torra not only rejected upgrading the statute of autonomy, but demanded self-determination again, and he also asked for a ‘bilateral meeting’ between the Catalan and Spanish governments given that Pedro Sánchez’s executive will hold a cabinet meeting in Barcelona on 21 December.

Yet, in a joint press conference, Urkullu urged Torra to take advantage of the ruling Socialist party’s situation in the Spanish Congress, where they lack a majority, in order to find a ‘political solution’ to the Catalan conflict.

Yet, Torra pointed out that the only response he had received so far from the Spanish executive to his demands to negotiate a binding referendum were prison sentence demands of 214 years for the former government from the public prosecutor.

‘Concern’ over use of direct rule

A number of sources have reported that Urkullu was key in the discreet moves to stop the declaration of Catalan independence and direct rule from Madrid last autumn and bring both sides to a dialogue. But he failed.

One year later, on Wednesday, the Basque leader also expressed his ‘concern’ over the use of Article 155 of the Spanish Constitution to impose direct rule on Catalonia last year. Catalonia and the Basque Country are ‘singular nations’, said Urkullu, and Article 155 had ‘put [self-government] at risk’.

President Torra ended by inviting Urkullu to a new meeting in Barcelona, and he also urged the Basque leader to visit the ‘political prisoners’ and ‘exiles’.

Urkullu pointed out that he went to see ERC party head, Oriol Junqueras, in the Lledoners prison in August, and he said he had ‘no problem’ visiting any of the prisoners should they ask him to. From a ‘humanitarian and political’ point of view, the pre-trial detention of the leaders ‘makes no sense’ said Urkullu.