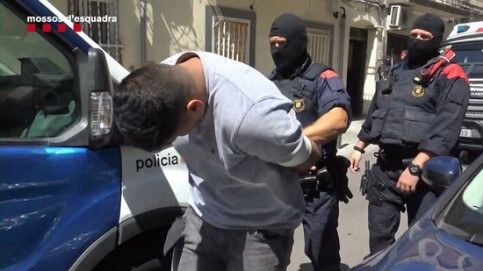 With eight fatal stabbings in Barcelona so far this summer, news reports of violent attacks, robberies, and murders have recently rocked the Catalan capital. In June, a Korean diplomat died following a mugging in the city, and more recently an Afghan government official was also hurt in a mugging. The BBC recently published an article analysing the effects of what they described as the ‘crime wave‘ in Barcelona.

However, the Catalan interior minister denies that there is a ‘security crisis’, and police sources say the data shows there is no reason to be alarmed. So, what are the facts behind these recent stories of violence and theft?

There were 83,472 robberies in Barcelona from January to 15 August according to data from the Catalan police, cited by the newspaper Ara. Among those, 5,310 violent robberies have been identified, a number up by 30.3% compared to the same time period in 2018. Crime overall has increased by 9% in the first half of 2019.

Despite this, sources from the Catalan police (the Mossos d’Esquadra) consider the data ‘not alarming or exceptional’ when examined over a longer period of time. They did, however, admit that the data ‘is not good’, and that thieves are not put off repeating their offences as they know they will not be kept in preventive detention if they are caught.

This year there have been 100 reported occurrences of violent robberies with the use of a weapon, but the police say that from what they understand, the number of people carrying weapons has not gone up, just that the activity has. They also explain that there is much ‘variety’ to the manner of the thefts, and say that there is a trend moving away from burglaries and towards street robberies.

Compared with Andalusia, which also has a higher population than Catalonia, there were just 1,740 violent thefts between January and March 2019. In the whole of last year there were slightly over 10,000 violent robberies in Madrid, while Barcelona saw 12,277.

Looking at data across Europe, in total robberies fell 24% between 2012-2016, with the trend flattening out in the last two years of this time period. In 2016, there were about 396,000 police-recorded incidents throughout the continent, and the EU data puts the Spanish state as one of the worst offenders for this statistic at over 100 robberies per 100,000 people.

Under Spanish law, any theft of goods or cash under the value of €400 is classified only as a misdemeanour, and not as a crime. If anybody is caught, they are usually given a fine of about €50. But no matter how many times you are caught, you are still only committing a misdemeanour, which means repeat offenders feel free to continue their operations on the street.

Thieves in Barcelona usually operate in groups, and this law gives them a sense of impunity to continue offending, as they know the punishment is minimal and something they consider not-prohibitive.

Earlier this week, Catalan interior minister Miquel Buch announced he was going to present a new plan for a stricter penal code for thieves, and ‘above all, re-offenders’. Buch said in a radio interview that he feels as if criminals can just ‘enter through one door and exit through another’, and stresses that they must ‘stop the problem at source’. He will pass this proposal through the Spanish Congress to debate potential legislative change.

‘No security crisis in Barcelona’

Catalan police point out that out of Barcelona’s 12 murders so far this year, two-thirds of which were related to drugs, and none of which were connected. Five of the 12 incidents have been resolved by the police already and, while they point out that the investigations are ‘not easy’, homicide cases have a resolution rate of about 90-95%.

The Catalan College of Criminology highlight the need to contextualize the recent rise in crime in Barcelona. Eight of the 12 murders that have happened so far this year have come in July and August, so a degree of recency bias may be at play in the public opinion, swaying people into believing a more dangerous narrative than what long-term data shows.

In a press release, the college also argues that the adoption of ‘preventive approaches based only on persecution and police dissuasion is worrying’. They make the case that scientific evidence points to zero-tolerance policies having more adverse effects than positive ones.

‘The scientific evidence has shown that the existence, and especially the concentration of inequality and social exclusion, the increase in poverty rates, and in general the worsening of living conditions, can increase the crime,’ they write.