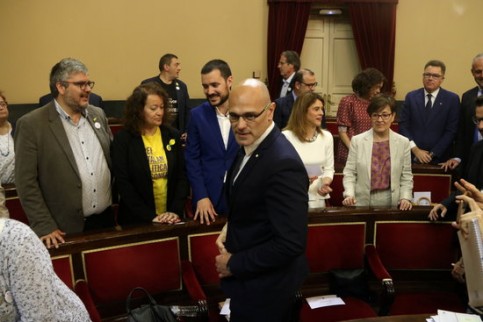 The Spanish Senate Bureau has approved the suspension of former Catalan minister Raül Romeva, who is currently in jail whilst a defendant in the Catalan Trial for his role in the 2017 independence bid. He had been elected as a senator in Spain’s 28 April General Election.

Senate lawyers issued a non-binding report on Wednesday arguing that the Bureau – the Spanish Parliament’s upper house’s ruling body – has the authority to depose Romeva as he is in prison awaiting the Catalan independence trial’s verdict.

The legal team based its decision on the same article used by lawyers in the Spanish Congress last week to suspend four pro-independence MPs, including the former Catalan vice president Oriol Junqueras, who are all also in custody whilst on trial.

The bureau is controlled by the Socialists (PSOE), with Senate speaker Manuel Cruz at the helm. The decision was also backed by the People’s Party (PP), while the Basque Nationalist Party (PNB) voted against the suspension.

Romeva has been in preventive detention for more than a year along with eight other pro-independence leaders. In the Catalan trial, which is due to end in less than a month, he has defended himself against charges of rebellion and misuse of public funds.

Footballers detained on suspicion of match-fixing