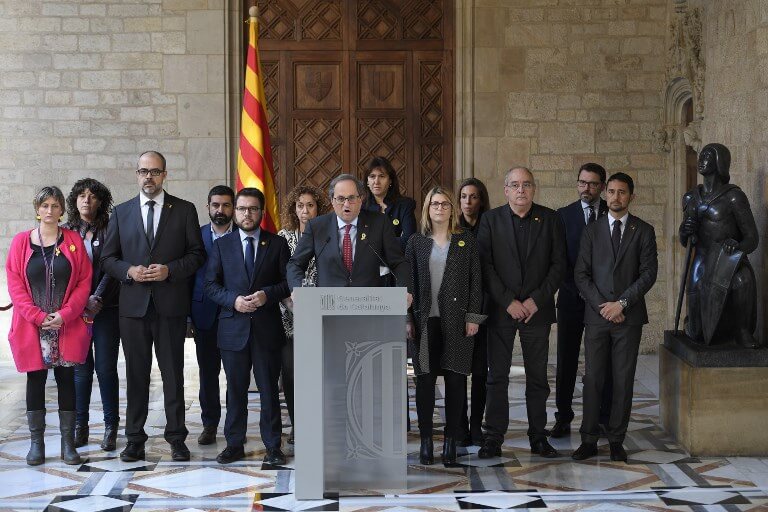 A dozen Catalan pro-independence leaders will go on trial on 12 February over their bid to make the region independent from Spain, the Supreme Court confirmed on Friday, whilst also naming former prime minister Mariano Rajoy among those called to testify.

Catalan President Quim Torra read a statement in Barcelona in English and Catalan in support of the defendants, saying ‘they have not committed any crimes’.

His statement was delivered on behalf of his government after an extraordinary cabinet meeting on Friday.

Nine of the accused are charged with rebellion for their role in the dramatic breakaway attempt in October 2017. They face up to 25 years in jail.

Rajoy, who was prime minister of Spain until last June, will be one of ‘hundreds’ of witnesses to testify at the trial, a Supreme Court document said.

The trial will last ‘around three months’, with a verdict expected at the latest two to three months later, the president of Spain’s Supreme Court, Carlos Lesmes, said during a meeting with the foreign press in Madrid.

‘This is the most important trial which we have known in democracy,’ he added.

The trial will be broadcast in full on Spanish TV.

It is expected to cause tensions between Spain’s central government and the pro-independence parties who rule Catalonia to flare up again, despite Socialist Prime Minister Pedro Sánchez‘s attempts at dialogue with Catalonia’s regional government.

As a result Catalan pro-independence parties are predicted not to support his minority government’s 2019 budget, meaning it will likely not pass, making snap parliamentary elections more likely later this year, analysts said.

‘Not committed any crimes’

In pre-trial detention for months, the nine jailed defendants were being transferred from the northeastern region of Catalonia to prisons near Madrid on Friday.

Supporters in Barcelona cheered them as they were taken away, waving the region’s red, yellow and blue independence flag.

Three others will also stand trial, accused of disobedience and misuse of public funds.

Catalan President Quim Torra read the statement in Barcelona, in both English and Catalan, in support of the defendants, saying ‘they have not committed any crimes’.

‘The problem for Catalan democrats is also a problem for the international community and especially for the European Union,’ he added.

‘We call on the international community, citizens, governments, civil and human rights organisations, the media and anyone committed to justice and freedom to join the Catalan people in their defense of principles and values that make the world a place more fair, safe and free,’ he said, speaking in English.

The Catalan president called the imprisonments ‘political repression,’ and said that since the October 2017 referendum ‘fundamental rights have been shamelessly violated’ repeatedly by Spain.

Torra also said that the country’s ‘relationship with Spain will change forever’ due to the trial.

Supporters of independence for Catalonia call the trial a ‘farce’.

But many Spaniards support it, having looked on in disbelief as the rich region’s then executive tried to secede.

Catalonia’s president at the time of the secession bid, Carles Puigdemont, is also accused of rebellion.

But he left Spain after the region’s majority-separatist parliament made a short-lived declaration of independence on 27 October 2017 which triggered Spain’s worst political crisis in decades.

He is not among the 12 going on trial this month in Spain, which does not try suspects in absentia.

The trial’s main protagonist is former Catalan vice president Oriol Junqueras, who opted to remain in Spain. He faces up to 25 years in jail on charges of rebellion and misuse of public funds.

Puigdemont and fellow pro-independence leaders have all denied any wrongdoing, saying the 2017 referendum gave them the authority to break away from Spain.

The Catalan government claimed some 2.3 million people took part in the referendum, and that 90% had backed independence. Those figures could not be independently confirmed.

Far from curbing the desire for independence, the prosecution of the leaders of the separatist push has energised the movement for Catalan self-determination and helped to keep the pro-independence movement united despite their deep divisions over strategy.

Catalans have held regular protests to demand the release of the jailed defendants, whom they call ‘political prisoners’.