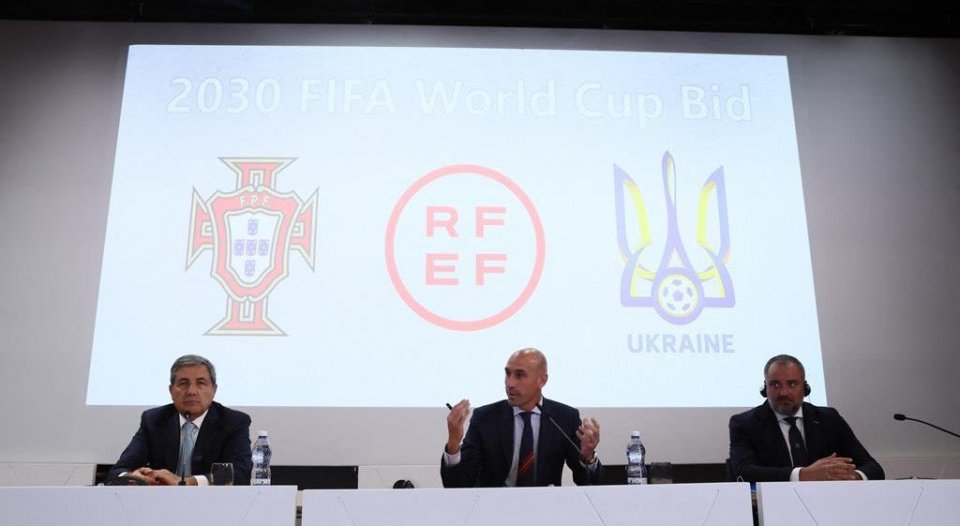 Ukraine is to join Spain and Portugal in a bid to host the 2030 World Cup, the presidents from the three countries’ football associations announced on Wednesday.

The original proposal of Spain and Portugal to jointly host the World Cup was made public two years ago and the Spanish football association (RFEF) said in a statement that the idea to now incorporate Ukraine was backed by UEFA president Aleksander Ceferin.

‘Now it’s not the Iberian bid, it’s the European bid,’ Spanish soccer federation president Luis Rubiales said on Wednesday. ‘Together we represent the power of transformation that football has in society.’

‘With the full support of Aleksander Ceferin, the Iberian bid incorporates the federation chaired by Andriy Pavelko in order to build bridges and project a message of unity, solidarity and generosity from all of European football,’ it added.

Ukrainian soccer federation president Pavelko said that hosting World Cup matches in 2030 would be ‘the dream of people who survived the horrors of war or are still in the occupied territories and over whom the Ukrainian flag will surely fly soon’.

Pavelko said the project is backed by Ukrainian President Volodymyr Zelenskyy. It aims to bring the World Cup back to Europe 12 years after Russia hosted.

Portugal hosted the 2004 European Championship while Ukraine was a joint host with Poland of Euro 2012.

‘The example of tenacity and resilience set by the Ukrainian people is inspiring,’ the FPF said.

The FPF added that the joint bid ‘aims to contribute through the power of football to the recovery of a country undergoing reconstruction’.

It added that the terms of Ukraine’s role in the bid ‘will be discussed and defined in due course’.

It follows the announcement last month from an Egyptian official that Egypt, Greece and Saudi Arabia are in talks to also bid jointly to host the 2030 World Cup.

In August, Uruguay, Argentina, Chile and Paraguay launched their bid to host the event — which will be the centenary of the first World Cup, held in Uruguay — with the hope of bringing the global showpiece back to its first home.

The 2026 edition has already been awarded to three countries — Canada, Mexico and the United States.

More than half of the 21 World Cup finals already staged have been in Europe but later this year Qatar will host the finals, the first time they have been played in the Middle East.

👉🏻 The project wants to send a message of hope for a peaceful future for Ukraine and the world. #Vamos2030 pic.twitter.com/FudR9p5OvG

Sitges opens public consultation on firework noise, ahead of possible modification of regulations