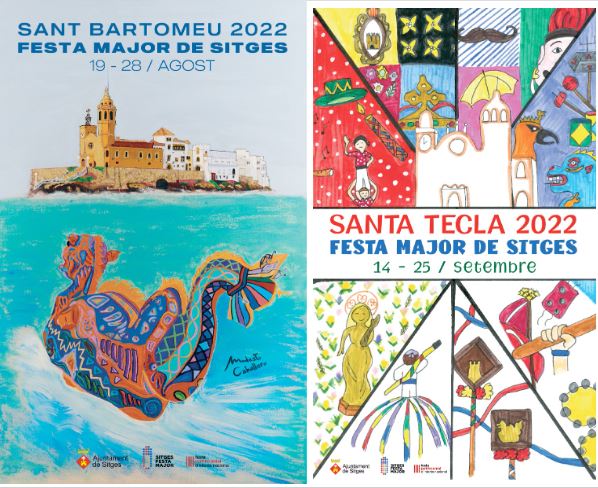 This week has seen the presentation of the posters and programme for the Festa Major of Sitges, that runs from 19-26 August, the town’s popular festival in honour of its patron saint, Sant Bartomeu – and also the Santa Tecla festival that runs from 14-25 September.

Both festivals will be celebrated as in pre-pandemic normality this year, with a full programme and activities, after the festivities were suspended in 2020 due to the pandemic, and the celebrations in 2021 were adapted to meet Covid restrictions.

Official posters for both festivals were unveiled at a presentation in the Jardins del Retiro. This year the poster for Sant Bartomeu is the work of Modesto Caballero and features the Dragon as its protagonist, who turns 100 years old and ‘arrived by sea’, a phrase that inspired the artist. This year Santa Tecla also has its own image, created by Laia Domínguez, and inspired by all the dances that take part in the Festa Major.

Laia’s creation was the winner of the children’s competition to create a Santa Tecla poster, which had the participation of more than a 100 entries from sixth grade students at Sitges schools.

The mayor of Sitges, Aurora Carbonell, invited everyone to celebrate this year’s Festa Major ‘without restrictions, showing the respect and civility that Sitges dedicates to its local traditions’, adding that it will be an ‘unforgettable festival’.

The local councillor for traditions and festivities, David Martínez, said that ‘after two years with our lives upended by Covid and during which we had to reinvent our festivals, this year, finally, we will return to celebrate our beloved Festa Major of Sant Bartomeu and Santa Tecla as we always did. We want to let ourselves go and enjoy them 200%’.

There will be many concerts taking place during August in Sitges to coincide with the Festa Major and Santa Tecla festivals, in La Plana of Santa Barbara, the Racó de la Calma, the Retiro gardens, in the church of Sant Sebastià, as well as at La Fragata.

Click here for the full programme of all the events and activites for the Festa Major and Santa Tecla festivals.