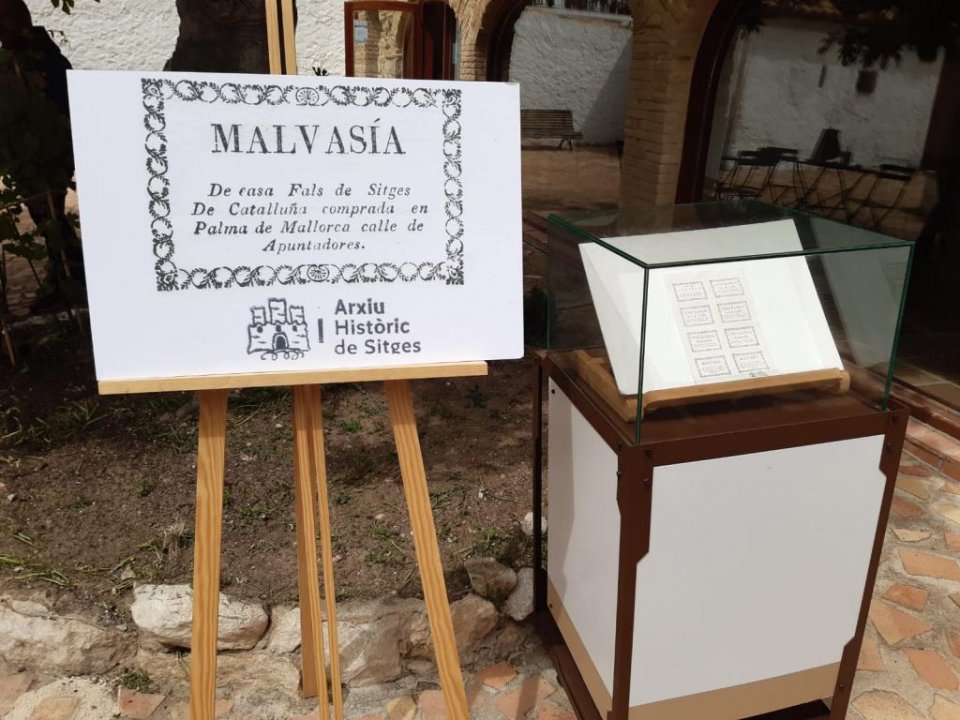 A recent study by the historian and archivist, Xavier Miret, has revealed that the Sitges Malvasia wine label dates back to at least 1811, adding further evidence to the importance that Sitges wine has had in the country.

One specific label dates back to 1811 and bears the inscription of ‘Malvasía’ accompanied by the explanation ‘From “casa Fals de Sitges de Catalluña” bought in “Palma de Mallorca calle de Apuntadores”‘. It measures 6 x 4 cm and corresponds to the production of Malvasia de Sitges that Ramon de Dalmau i Falç from Sitges had marketed in Mallorca, where he moved with his family in 1809 to escape the risks of the Napoleonic invasion.

The label is part of the Can Falç collection, deposited in the Sitges Historical Archive. A recent work by its director, the historian Xavier Miret, has shed further light on the commercial origins of wine in Catalonia. Previously there had been evidence of a label from Can Falç from the 1820s.

The work of Miret states that there is currently no other documented wine label in Catalonia prior to this date. In fact, his research suggests that the first label could even be two years earlier, in 1809, when Ramon de Dalmau left Sitges for Mallorca, where he remained until 1814.

Miret said that ‘this label is not just a wine label, but a document that attests to the first wine brand in Catalonia and, who knows, if in the [Spanish] state and the [Iberian] peninsula.’ He said that ‘so far no other has been known to be so old and everything indicates that, both in Catalonia and in the rest of the peninsula, the wine brands were later’.

Ramon de Dalmau i Falç inherited the family wine estate of Can Falç from his brother Josep in 1809. Josep de Dalmau i Falç had travelled through France and other European countries, which in those years were already marketing their wines with various labels and presentations.

Shortly after taking on the legacy of Malvasia de Sitges, Ramon de Dalmau went with his family to Mallorca and took the Malvasia from the winery in Can Falç, Sitges, as well as glass bottles and corks. In Palma he had labels printed to sell the wine produced in Sitges.

A hundred years before, in 1716, there were 300 hectares of vineyards in Sitges, 90 of which were Malvasia. It was not, therefore, the only variety, but prized by the most demanding consumers and the one which favoured the most foreign trade. Throughout the 18th century, however, the decline of Malvasia production began, and by 1772 the number of hectares had been reduced to 70.

In 1980 only three hectares of Malvasia de Sitges remained, those of the Celler de l’Hospital de Sant Joan Baptista, which became part of the Llopis legacy. The project to recover the prestige of Malvasia grapes and expand production meant that in 2010 there were 10 hectares, due to the new plantations, especially in Ribes. There are currently 100 hectares, distributed among 33 producers from all over Catalonia – especially in the Penedès region, one of the two denominations that now recognises the Malvasia de Sitges.

Since its inauguration three years ago, the Sitges Malvasia Interpretation Centre – part of the Sant Joan Baptista Hospital Foundation – has been dedicated to promoting the study and dissemination of Malvasia wine, together with promoting the expansion of its production.