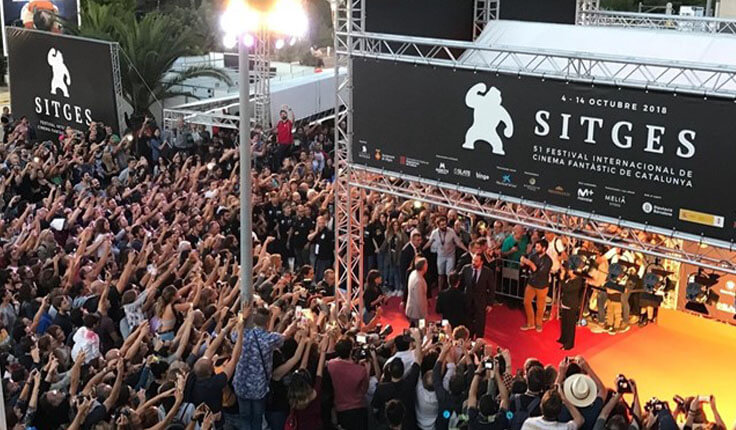 The 54th Sitges – International Fantastic Film Festival of Catalonia is about to kick off, with the streets in town already decked out to celebrate the next 11 days of screenings of the very latest films in the genres of horror, fantasy and animation.

From 7-17 October, fantasy genre fans will be able to enjoy a line-up featuring 169 films, bringing together the latest and most eagerly awaited trends in a film genre winning important awards at major festivals. A clear example is Julia Ducournau’s Titane, winner of the Palme d’Or at Cannes 2021, and which will be part of the Official Fantastic Selection’s Special Screenings along with Edgar Wright’s eagerly awaited Last Night in Soho – as well the combination of Nicolas Cage and director Sion Sono in Prisoners of the Ghostland.

Earwig, the Special Jury Award winner at the 2021 San Sebastian Festival, will also be in Sitges, accompanied by its director, Lucile Hadzihalilovic, who will receive the Career Award presented by the Méliès International Festivals Federation (MIFF). An award that will be added to those of directors Mamoru Hosoda, who will present his latest animated film Belle in competition, and Carlos Saura, honoured along with actress Belén Rueda with the Grand Honorary Award.

This year’s Time Machine Awards will go to director Neill Blomkamp, who is presenting his latest film Demonic in the Official Selection, actress Alice Krige, leading lady in She Will, also in competition, and Nick Antosca, special guest at the Sitges Pitchbox’s new showrunners lab and screenwriter for Antlers, a Guillermo del Toro production that can be seen at the Festival. Completing the list of award winners at this year’s edition are composer Roque Baños, winner of the Honorary María Award, and actor Emilio Gutiérrez Caba, who will receive the Nosferatu Award presented by the Brigadoon section.

Ana Lily Amirpour will be returning to Sitges seven years after her debut with A Girl Walks Home Alone at Night to present the opening film, Mona Lisa and the Blood Moon, the first film directed by a woman to open the festival. Meanwhile, the epic medieval fantasy The Green Knight, directed by David Lowery, will be the film bringing Sitges 2021 to a close.

Also returning to Sitges is another regular, Ben Wheatley, with his new film In the Earth, shot in the midst of the Covid pandemic. Other films that were a big sensation at the 2021 Cannes Festival like the Norwegian The Innocents, the Icelandic film Lamb, or terrifying and violent Asian films like The Medium and The Sadness, are also among the films at this year’s festival.

Spanish productions will also be present in Sitges with the feature debuts by Catalan David Casademunt with The Beast and Alberto Evangelio with Visitor, the horror epic Everyone Will Burn, the Galician film Jacinto, a terrifying road-movie in a van in The Passenger, disturbing science fiction in Tres, Carlos Vermut and Paco Plaza‘s alliance to bring La abuela to life, the world premiere of Álex de la Iglesia‘s Veneciafrenia, and the premiere of the four stories in Historias para no dormir, which brings together some of the most important directors on the contemporary Spanish film scene: Rodrigo Cortés, Paula Ortiz, Paco Plaza and Rodrigo Sorogoyen.

There are numerous parallel activities taking place during the festival, including a new meeting point, the King Kong Area, and the delicious Foodtàstic Area on Balmins Avenue, offering meat, vegetarian and vegan options. The Mercat Vell (Old Market) area will also be hosting a series of film workshops dedicated to the youngest members of the family, as part of the Fantastic Kids programme. This year’s Fantastic Zombie Experience offers make-up, a photocall, gastronomy and dancing, replacing the classic Zombie Walk, which will have to wait another year due to capacity and Covid restrictions. For more information on all the side events, click here: sitgesfilmfestival.live/

Once again this year, the Hotel Melia’s Auditorium, Tramontana, Brigadoon and the Retiro and Prado cinemas are the festival’s key venues. In addition, the festival’s professional section will be featuring more than 30 activities including round tables, presentations and pitches of projects in development, workshops and master class sessions.

Click here for full details of the line-up of films.