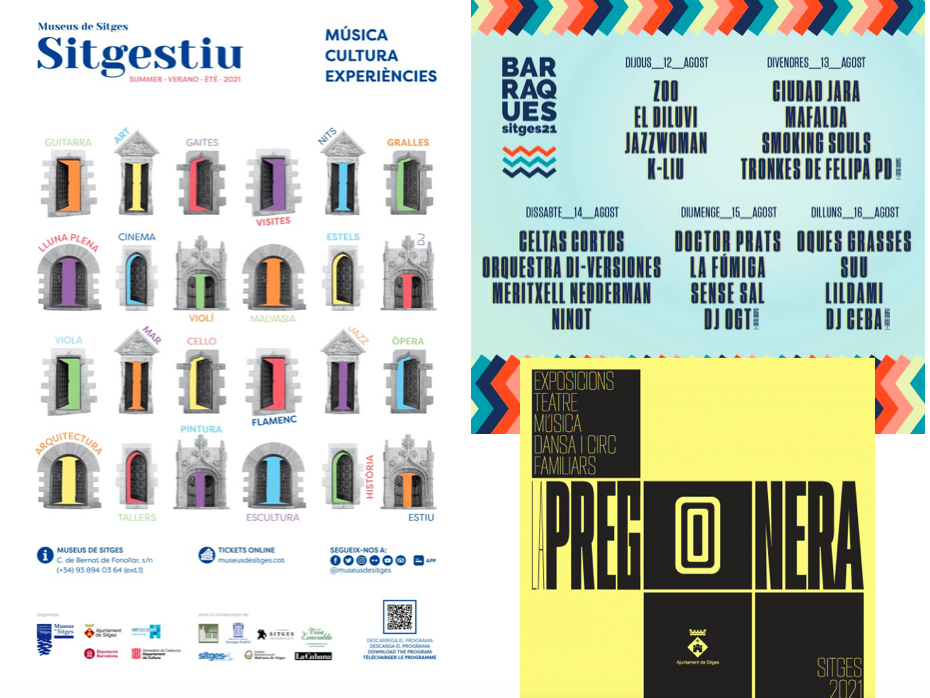 A few years ago, sitting on the terrace at a restaurant in town during the Sitges International Film Festival, I overheard an American film executive complaining loudly to his companion that he couldn’t understand the information in a booklet that listed in Catalan (and only in Catalan) where and when all the films were showing. Worse, he had no idea where his ‘own’ film was being screened. This was before the era of apps that nowadays, sometimes, if they work, and only if you’re really lucky, offer snippets of information in more than one language. He was loud, he was cursing, but I actually sympathised with him.

I had the film festival’s full colour press catalogue with me, also used for film industry buyers and distributors. It actually described each film in Catalan, Spanish and English (and still does each year), but because it is printed early, it never lists the screening times or locations. When I asked to look at the American’s booklet, he said he had no idea what or where L’Escorxador was, or the Sala Tramuntana, there were no addresses given, and the screening details were all in Catalan. I explained everything to him, and he was very grateful.

I know what some of you are thinking: the loud American film exec should learn Catalan.

Well, no, sorry. Not in this case. This was and is an international film festival – in the same way that Sitges also hosts other ‘international’ festivals. It’s not easy for an international visitor to an international festival to pick up enough Catalan before arriving, in order to understand what’s on and where, and in what could possibly be just a day trip or a weekend visit. I have never seen any key information given only in French or German during my visits to the Cannes and Berlin film festivals. As far as I recall in Sitges, at least during the pre-pandemic 2019 film festival, the printed booklet was still only in Catalan.

Where am I going with this? Anyone who knows me will know that I’m the first to defend Catalan culture and the Catalan language. I also defend the right of Catalans to vote in a referendum without being beaten up by the Spanish National Police or Guardia Civil, but we’ll leave that debate for another time …

Around 30% of the 30,000 population in Sitges are international residents – that’s 9,000 people. Many of them, of course, speak Spanish or Catalan, or some Catalan, or they can understand enough to ‘get by’, if that’s all they want to do. Then there are the tens (hundreds?) of thousands who visit each year.

I’ve worked in media and communications all my life, 24 years of it between Madrid and Catalonia, and it still shocks me to regularly see how event organisers here totally fail to promote their activity to … well, ‘the 30%’. I often see beautifully designed event posters on display in the Cap de la Vila, but without any clear information at all about the venue, time or if tickets are even required.

I sometimes wonder if it’s because they don’t want me or the 30% to attend. It’s as if we have to guess what some events are about, let alone where they’re being held. I shouldn’t say this (because it’s my job to find out), but I actually gave up trying to find out what La Cubana was all about, and I still don’t understand what, when or where the Pregonera or Barraques are. Yeah, I’m still a guiri, despite living here since 2007.

I’m also beginning to sound like that ranting and raving American film executive, so I’ll stop.

Where I’m going with this is simple: it is my strong belief that if and when some information is first explained in English, then the international resident or visitor will be more interested to try and read about it in Catalan, and to immerse themselves more in local culture.

That’s my opinion, and it was part of the reason for starting Sitges in English and collaborating with the local L’Eco de Sitges newspaper to create their English pages. The idea is not to try and make everyone speak or read English – far from it. The idea is to give people enough information in English so that they might then read and appreciate it more in Catalan.

This article first appeared in L’Eco de Sitges on 6 August.

If you’d like to contribute to Spain in English, please email: editorial@spainenglish.com

First human trial of a Spanish vaccine against Covid-19 authorised