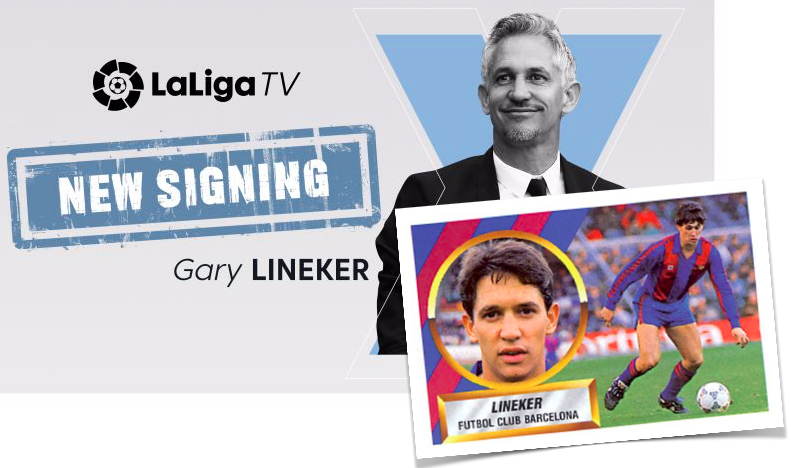 Former FC Barcelona striker and England captain Gary Lineker has signed a multi-year deal to present Spanish football on La Liga TV from the 2021/22 season and beyond.

‘I’m thrilled to become a part of La Liga TV, a channel I’ve watched every weekend for the last two seasons,’ said Lineker, who played for Barça from 1986 to 1989, scoring 42 goals in 103 league appearances. He scored twice on his debut for the club and registered a hat-trick in a Clásico against rivals Real Madrid. ‘I have fond memories of my time playing in Spain and very much look forward to sharing the excitement of LaLiga with viewers in the UK and elsewhere.’

Lineker will join Spanish-football experts such as Guillem Balagué, Graham Hunter, Albert Ferrer, Terry Gibson and Sid Lowe, among many others, bolstering the on-air talent pool for the linear TV channel, launched in the UK and Ireland in January 2020 as part of La Liga’s partnership with Premier Sports. La Liga TV is also available in the UK via Amazon Prime Video Channels.

Melcior Soler, Audiovisual Director at LaLiga, said: ‘Adding Gary Lineker to our talent pool is really exciting for La Liga fans. He has a vast portfolio of presenting experience and an in-depth knowledge of Spanish football. We look forward to witnessing the expertise, energy and passion he will bring to La Liga TV.’

Lineker has a wealth of broadcasting experience, having been the host of BBC’s Match of the Day since 1999, heading up the channel’s coverage of major international tournaments across the same time period and fronting BT Sport’s UEFA Champions League offering for six seasons.