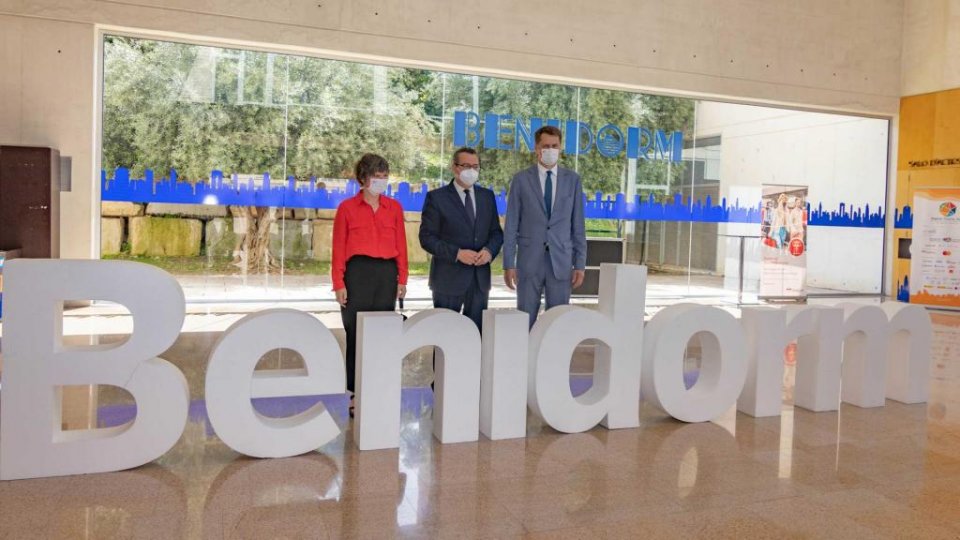 With beach weather already here and the summer holidays just around the corner, tourism businesses across the Valencia region are desperate to know if British holidaymakers will be able to come here this summer. So, the announcement this week that Spain is to remain on the UK’s ‘Amber list’ of countries for the time being, came as a huge blow to the tourism sector.

In Benidorm, where British tourists make up 50% of the market, the UK government’s decisions will be make-or-break for some businesses. And it’s not just the businesses who are desperate for the holidaymakers, UK tourists themselves can’t wait to return. In fact, according to Invattur, the most Googled phrase related to the Costa Blanca this week has been ‘Is Spain on the green list?’

The British Ambassador to Spain, Hugh Elliott, visited Benidorm this week and met with the city’s mayor, Toni Pérez on Wednesday. The main topic of discussion was obviously tourism and the UK traffic light system, but there was still time for Elliott to give the mayor a jar of the embassy’s homemade Seville Orange Marmalade.

Pérez, who has been pushing for Benidorm to be recognised separately, given its low Coronavirus rates and the fact that most UK tourists don’t travel out of the area, summarised the meeting as ‘extremely interesting’ and said that there could be movement of tourists in larger numbers from July-August, August-September. He reiterated his message that Benidorm is, in terms of Coronavirus safety measures, ‘possibly the safest tourist destination in the world’, and said that the infection level in the city is just 15 per 100,000 of the population. The current rate in the UK is around 40.

Replying to journalists’ questions, the ambassador said that the UK strategy is to look at the situation of the country as a whole and, while he appreciated the effort that has been made by the city and the desire for British tourists to return, the UK could not look at individual cases, such as Benidorm.

On Thursday Elliott was interviewed by the radio station Cadena Ser where he said that while Spain’s rates were improving and that the UK recognised that and were pleased about it, the levels were not low enough to instil confidence and put Spain onto the green list. ‘The British people and many companies are eager to come back to Spain, but we have learnt that we have to be cautious in moving forward,’ he said.

‘Decisions are taken with the most recent information. There is a very fluid exchange of information, the question is not a lack of information, but is about being cautious. That is the best way to contain the virus.’

And what about those of us resident in Valencia wanting to go back to the UK to see loved ones? Well, Tara West, from l’Eliana, recently did just that. Read my interview with her here: PCRs and quarantine … an experience of travelling from Spain back to the UK

Changes to the Coronavirus restrictions were announced this week and include an end to the nighttime curfew after seven and a half months, as well as the re-opening of discos and nightclubs until 2am, albeit without dancing allowed, and indoor capacity limited to 50%. Outdoor terraces can be at 100%, and bars and restaurants will now be able to stay open until 1am. There will also be no limit on social gatherings in private or public spaces. The changes come into force on 8 June and will last until the end of the month.

Valencia president Ximo Puig announced the changes on Thursday. He said that the region had consolidated ‘a unique health situation’ allowing it to move forward, given that for 11 weeks it has maintained the lowest levels of infection rates in Spain, 3.5 times lower than the national average and that it’s a reference among the EU as ‘the safest destination, along with Malta’. He added that the curfew had been the definitive instrument in controlling the virus.

No smoking on this beach, thank you

50 beaches across the region have joined Playas sin Humo, a network of smoke-free beaches which have no-smoking signs and specially trained staff to make sure the rules are complied with. You can click here to find out which beaches are part of the network.

To mark the World Health Organisation’s International No Tobacco Day, which was last Monday, the health department promoted the smoke free beaches initiative and released figures about smoking habits in the region: some 20% of Valencians over the age of 16 say they are regular smokers and the average age of taking up the habit is 14.2, according to the latest report by ESTUDES.

Majority of under 60s choose to continue with AstraZeneca

All those under 60 who have had a first dose of the AstraZeneca vaccine have been advised by the Spanish health ministry to take the Pfizer jab for their second dose. However, despite the advice, 76% have chosen to continue with AstraZeneca. The decision to offer a different vaccine was due to concerns over AstraZeneca being related to blood clots in younger members of the population. Meanwhile, 24% have chosen not to opt for AstraZeneca and are happy to have the Pfizer jab as recommended by the government.

The under 60s who received the vaccine before others of their age group, back in March and April, were those in key jobs, like firefighters and police officers. The other large group who had their first jab were school staff and teachers, who are likely to have their second dose delayed slightly until after the school year finishes on 23 June. ALSO READ: Spanish study shows it is safe to receive a Pfizer jab after AstraZeneca

A week of record-breaking vaccinations

On Wednesday, the region passed the one million mark of people who are 100% vaccinated. Wednesday also saw another milestone with a record 101,101 doses administered in a single day. On Friday, the health department announced that two million people have now had their first vaccine.

Meanwhile, according to reports by Europa Press, vaccination of those in their 40s has been brought forward 10 days and will begin tomorrow [Monday], with some in that age range already having received their appointment via SMS on Saturday. Those between 30 and 39 are to be vaccinated in July, but if the speed of vaccinations continues then they may also be brought forward.

You can click here to check your health card details are correct. And also click here to see when your age range is to be called. ALSO READ: Covid-19 Vaccinations in Spain

From 1 June a new timetable of electricity tariffs came into effect, with the introduction of three different price ranges. The cheapest is at night and the most expensive are times in the morning and afternoon/evening. There are also intermediate daytime periods when there is a middle price.

I’m all for saving money, but quite frankly getting four girls up and off to school is enough for me of a morning, so adding ’empty dishwasher’ as well as ‘hang out washing’ to my list of morning tasks has left me pretty frazzled this week.

The other problem with so many people using their washing machines at night is that in apartment blocks those who do so could face large fines as it may be considered noise disturbance.

Tuesday is the first day of the PAU, university entrance exams, so good luck to anyone sitting those tests and ánimo! to all those supporting a young person taking the exams. By Friday it will all be over!