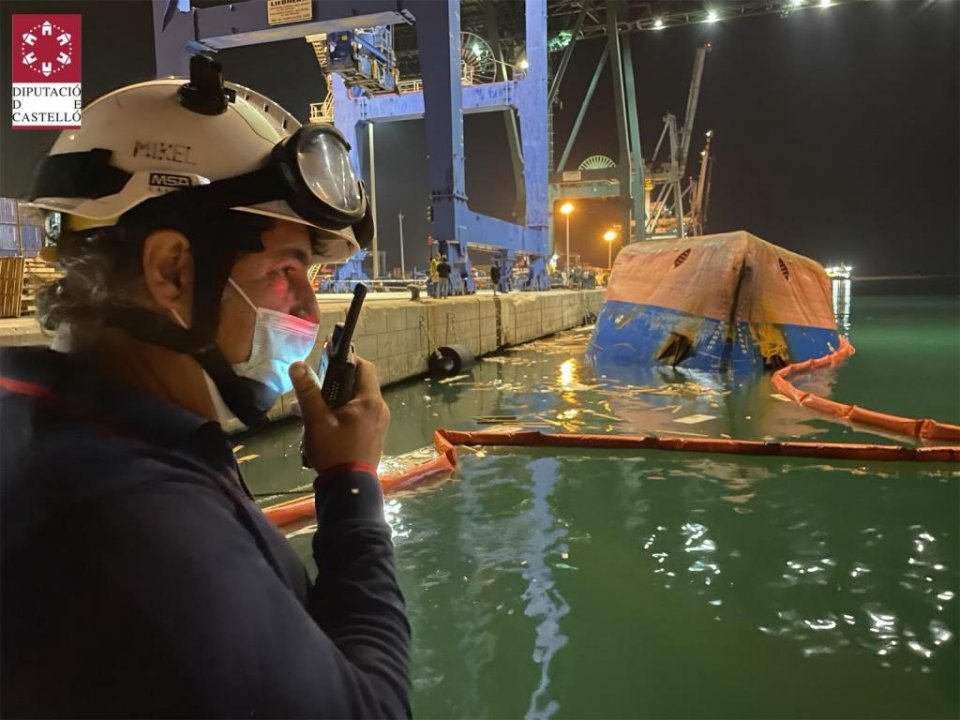 Ship capsizes leaving one dead, one missing and another in intensive care

Rescue teams have found the body of a crew member from the Nazmuye Ana container ship which capsized in the Port of Castellón on Friday. The body is that of a 22-year-old Indian man who worked on the ship, the port authorities have confirmed.

The accident occurred at 8.30pm on Friday while the Nazmuye Ana, which is registered in Panama, was being unloaded.

Rescue teams have been working tirelessly since Friday evening, only stopping for a few hours during Friday and Saturday nights because of a lack of light and also concerns about the stability of the ship. The port remains closed while the search for the other missing person, a 36-year-old port worker from Castellón, is on-going today (Sunday).

Rescue workers have been aided by two submarine robots which were brought from the local Universitat Jaume I in Castellón and from Maritime Rescue in A Coruña.

Another port worker, a 46-year-old from Grau, was also injured and was taken to Castellón General hospital where he is in an induced coma in intensive care, while doctors carry out tests.

The British Ambassador to Spain, Hugh Elliott, received the Valencia president Ximo Puig at the embassy in Madrid last Monday. Puig was there to try and persuade the British government to include the Valencia region in its ‘Green‘ list of countries where Brits don’t need to quarantine when returning home.

While the meeting was reported to be friendly on both sides, and Elliott tweeted his thanks for Puig’s visit, the ambassador can really only forward a request from a region of Spain to the UK government.

Elliott also had meetings with other regional leaders during the course of the week. Also read: Spain’s regions ask British ambassador for help to get on UK’s ‘green list’

Following his meeting with the ambassador, Puig continued his campaign to get Valencia on the ‘Green list’ and tweeted the latest figures in the form of a graph to show just how save the region is.

Nuria Montes, general secretary of Hosbec, the hoteliers association of Benidorm and the Costa Blanca, made a scathing attack of the UK’s criteria for classifying countries in their traffic light system and accused Prime Minister Boris Johnson of protectionism.

Speaking on the radio station Cadena Ser on Tuesday, Montes said that the Valencia region poses no threat to the British tourist and that if Johnson continues to keep the restrictions in place, it won’t be for public health reasons.

She said that if Spain, or the Valencia region, is left off the ‘Green’ list, despite having figures showing control of the pandemic which are ‘absolutely exemplary and much better than the British’, it would be for ‘criteria of economic protectionism and not health criteria’.

Commenting on Puig’s trip to Madrid, Montes said that the words of the British ambassador didn’t inspire much optimism that the UK was likely to change their mind any time soon about Spain’s position on their traffic light system.

Montes said that where the UK was concerned, ‘nothing is ever clear’ as it is a government ‘with some tremendously particular ways of behaving’.

Asked if she was expecting a shower of British reservations if the UK government classifies Spain as a safe area, she said that she hoped that would be the case but that the figures Hosbec have so far are very temporary and quite provisional. ‘We’re going to wait and see what the British government decides,’ she said.

As expressed by Puig, the Coronavirus figures for the region continue to make for comfortable reading with all the indicators going in the right direction and hospital admissions continuing to decrease.

As of Friday, there were 115 people in the region’s hospitals being treated for Coronavirus, down on last week’s 128, with 24 needing intensive care treatment, also lower than last week’s 33.

There have been 17 deaths registered but of those only five occurred in the past seven days, with the others being from December, January and February.

From Friday, the health department began making second appointments for those under 60 who have already received the first dose of AstraZeneca. The second dose offered will be Pfizer, but individuals can decline the Pfizer vaccine and opt for a second dose of AtraZeneca, but they’ll need to sign an informed consent form. [ALSO READ: Spanish study shows it is safe to receive a Pfizer jab after AstraZeneca]

Meanwhile, many in their 50s have been given appointments for the coming week as the vaccination programme continues gaining momentum. As of Friday, a total of 2,697,414 doses of vaccines had been given across the region, with 903,533 people already fully vaccinated. ALSO READ: Covid-19 Vaccinations in Spain

The town of Bétera, in the Valencia province, has once again topped the regional list of towns with high earners, according to figures from National Institute of Statistics (INE) analysed by Cadena Ser radio. The INE compared 416 towns and cities across the country with more than 20,000 inhabitants using figures from 2018.

Bétera, with its average net earning per inhabitant of 14,459 euros, also made it into the top 50 municipalities nationwide. It’s important to note, however, that the residential areas around Bétera, being close to the Valencia CF training ground, are popular with football players and that could pull the average up considerably.

Nationally, the highest average earnings are in Pozuelo de Alarcón, Madrid, with 28,326 euros.

The Spanish team from Castellón have been welcomed home as heroes after beating Manchester United in a truly nail-biting 11-10 penalty shoot-out to win the Europa League Final on Wednesday evening.

Around 2,000 fans from Villarreal travelled to the Gdansk Stadium in Poland, for a final they would never forget, and watched 11 men write history.

After 120 minutes of play, two goals and 20 penalties, it came down to one goalie against another. Every player on the pitch had already stepped up to the penalty spot. And scored. Just the goalies were left. The Villarreal keeper, Rulli, who was in fact the second-choice keeper, stepped up first. He later commented that he had never taken a penalty before, but he smashed it into the top-left corner, giving the yellows a clear sheet of 11 penalties scored. Rulli now faced the Manchester United keeper, De Gea, whose shot Rulli saved and secured the victory for Villarreal. The stadium exploded in a blaze of yellow. As the Spanish sports newspaper Marca said on their frontpage: ‘It’s not yellow, it’s gold.’

After reaching the semi-finals four times, the club have now won their first trophy in their 98-year history, and, with a population of 50,000, become the smallest town to have a European title.

Villarreal now face Chelsea, winners of the Champions League, in the Super Cup in August.

Benidorm’s Low Festival joins the list of events cancelled for a second year. The rock, indie, pop, electronic music festival was due to take place mid-June at the Julio Iglesias Auditorium in Benidorm, but has now been cancelled, with the 2022 festival planned for 29-31 July. Any tickets already bought for the 2019 or 2020 editions will be valid for the 2022 festival.