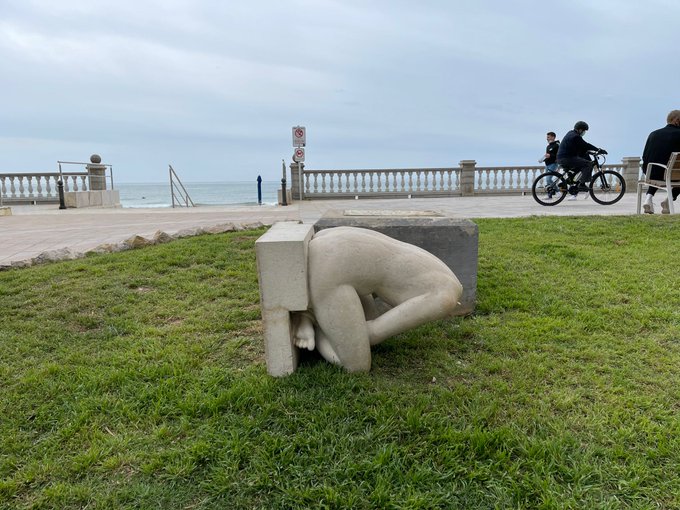 The sculpture of Dona asseguda nua (Woman sitting naked) in La Ribera promenade in Sitges, was the target of vandals during the night of Saturday to Sunday, and who decapitated the figure.

Vandals removed the head of the statue, which was later found a few metres away by a local neighbour in the early hours of the morning and who contacted the police. The act of vandalism took place when bars and restaurants had already closed, which would have been after midnight under the current restrictions. It appears that vandals pushed over the sculpture before removing the head.

The sculpture and head were taken away on Monday by municipal workers to a warehouse awaiting restoration. The base of the sculpture was then fenced off by police to prevent people from approaching it

The police have begun proceedings to report a crime against property and are investigating the incident to find the possible perpetrators. In the early hours of Sunday morning an establishment located nearby also suffered a robbery.

The sculpture Dona asseguda nua dates from 1965 and is the work of the Noucentista sculptor Josep Busquets (1914-1998). It is made of stone and is 98 cm high. It is part of a dozen other sculptures along La Ribera. Precisely, another sculpture in the area, Apollo, suffered a similar act of vandalism at the 2019 Carnival and was later restored.

Discounts at the C-32 toll gate will penalise regular users

Curfew to end in Sitges, but establishments must still close at 12.30am

Covid figures drop significantly in Sitges, but are still above previous months

Half the population of Sitges and Ribes are now fully vaccinated