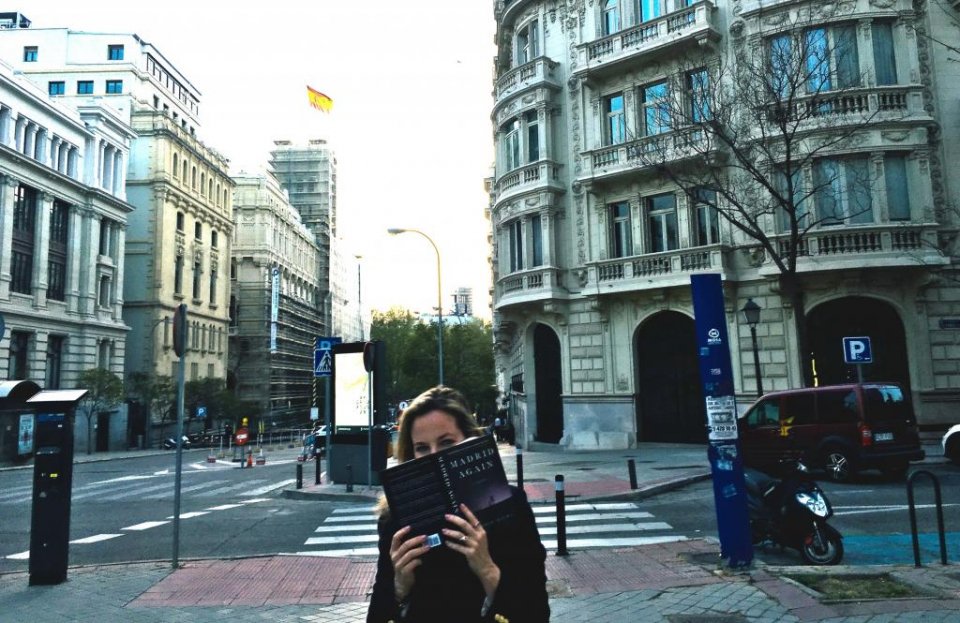 Late in Soledad Maura’s debut novel Madrid Again, the narrator, Lola, riffs on the minor yet consistent irritations of being bi-cultural and bi-lingual. ‘The other prize annoying question,’ she gripes, ‘was what language I dreamed in. Some people feel really smart when they ask that one, and won’t let it go until you’ve given them some definitive answer.’

As a child who grew up between Spain and the US, living in both Spanish and English, Lola identifies with both cultures while failing to feel fully at home in either. Such questions won’t let her forget her in-between-ness. More profoundly, though, this reference to dreaming serves as a reminder that – to paraphrase Stephen Daedalus in Ulysses – Lola’s family history, which was defined by the violence and exile of the Spanish Civil War, is in certain ways a nightmare from which she has been trying to awake her whole life.

Even so, Madrid Again isn’t a dark novel, or even a story that falls neatly into the Spanish Civil War tradition in fiction. Instead, it is an intimate yet succinctly sweeping story about the distant aftershocks of the defining event in 20th century Spain, following the ripples from Lola’s mother’s marriage to a mysterious Spanish writer who brings her to the US only to abandon her; to Lola and her mother’s endearing, outsider existence in New England; and finally to Lola’s coming of age and adulthood exploring the past to make sense of her present.

All of this adds up to a subtle and shimmering novel about searching – for identity, for secrets, and ultimately for home. Like Lola – and like Soledad Maura herself, a Spanish-American writer and academic – Madrid Again is a book as American as it is Spanish. An immigrant story about finding belonging between two cultures, and a postwar story about communing with the ghosts of history.

AARON SHULMAN: Could you tell readers a bit about your background, since your identity as a Spaniard and American plays strongly into the story of your novel?

SOLEDAD MAURA: I was raised between Spain and the United States (New England and New York City). When the time came to figure out what to do after college, I worked in film while taking courses for my PhD in Comparative Literature at the Graduate Center of the City University of New York. This seemed like the ideal field for me because it didn’t force me to swear allegiance to one national literature and language for the rest of my working life. I have also spent periods of time in France and England, but the Spanish and North American identities are foundational for me. Corn on the cob or tortilla de patata? Maine or Cadiz? The Prado or the Met? Jazz or Flamenco? I wouldn’t want to choose. Like the song says, tengo el corazón partío.

AS: This novel was almost a decade in the making. Can you talk a bit about the twists and turns of that process?

SM: I spent over a decade hunter-gathering bits of materials. Memories, other people’s stories, imaginings, impressions from travel and readings. I think I was influenced by films as well as literature and other texts. There are definitely parts of Madrid Again that I see as a black and white film (the 1930s in Barcelona and Sevilla, the 1950s in Madrid) and others in Technicolor (the 1960s in New England). I had different voices for different characters and that did not work. Some experimental things I tried, such as switching narrative voices, didn’t work, and had to be revised to pull everything into first person narration. There was a long process of giving it shape, and lots of rewriting. The story covers three generations, and that is a lot of chronology. I wanted to be somewhat sweeping in terms of epochs, intimacy, history and politics, yet I was aiming for something minimalist, and a certain simplicity in the language. The narrator has a limited point of view even as an adult, and she is aware of that. We never have all the answers we hoped for.

AS: From what I know about your life, this novel has a lot of autobiographical elements. Could you explain how fact and fiction interacted for you in the writing?

SM: I never wanted to tell my life story. My material is personal because I wanted to use ingredients I was familiar with. You won’t catch me writing a novel about the Knights of the Round Table. I have nothing against them but I like my point of departure to be contemporary reality. Madrid Again seems much more rooted in my life than it is, and I am happy about that. Many authors mine their lives, and I realise that my somewhat prosaic style may seem more autobiographical, but it took lots of work on my part to make the narrative into what it is, and it is not my life, not least because I explore the intimate lives of many characters who I could never speak for in a memoir, and describe life during periods before I was born. That is the freedom fiction offers.

AS: What writers or books were your guiding lights while writing the novel?

SM: I’m going to name people I have identified with over the years of writing, but I want to clarify that it is not to be considered worthy by association, but because elements in their work turned me on to wanting to write in a new way: Philip Roth, Sylvia Plath, Ian McEwan, Ben Lerner, Ottessa Moshfegh, Deborah Levy, Mercè Rodoreda, Najat El-Hachmi. Biographies, diaries and letters have also been influential in the sense that they highlight and give tremendous value to private moments and unknown corners of lives that may not be considered ‘fiction worthy’ in a traditional sense. From all of these writers I have found a mood, a voice, a sense of mystery, an attitude, an unveiling of something apparently small, that I have identified with.

AS: This book is about what it means to have a complex, cosmopolitan, multinational identity, and the legacies and challenges this brings with it. What do you see as the challenges – literary, personal, and political – today of navigating identity, nationality, history, etc?

SM: A term that was so under-used and now may be over-used is very relevant to me: third culture-kid. That’s what I was, without knowing about the concept until very recently. Having a different culture, language and history in my family than those that most of the people I was surrounded by has shaped me. I am always perceived as a foreign woman (emphasis on both words) no matter where I am. The traumatic legacy of the Spanish Civil War and of social conventions in Spain under Franco, and in the US in the 1970s and 1980s are also part of who I am.

The protagonist of my novel, Lola, goes through a process in which she realises that history and family must be grappled with in some way, for her own good. They don’t have to dominate her life forever, but the ghosts are there, and it is best for her to acknowledge that. She has to break some taboos by questioning decades of silence and secrets. Though she is Spanish-American, I think that everyone has to grapple with the past in some way, and that many people struggle to connect with what they can call home. One reader said to me that they identified with the protagonist, but that New Orleans was their Madrid. So while there are important Spanish elements, Lola’s sense of displacement and longing for roots is not uniquely Spanish by any means.

There is a parallel in that I also felt like I was breaking taboos by writing a non-scholarly work, and venturing into fiction and into a very close portrait of women’s lives. Many novels are more outspoken, graphic, or searing than mine, no doubt, but one can only work against one’s own yardstick of limitations. That is where tension of creativity lies. On the one hand, I am pleased that I was able to do this and explore new terrain, and on the other, it is annoying that these taboos ever existed, and still exist at all.

Soledad Maura is a Professor at Williams College (USA) and a former Senior Fulbright Research Scholar. She writes about Spanish lives, literature, history, and culture and is also interested in France, the United States, and Mexico. Her biography of Jorge Semprún was published by Penguin Random House in Spain and by Flammarion in France. Her first novel, Madrid Again, was recently published by Arcade (New York). She has written for Lit Hub, El País, and S Moda, She misses Barcelona, where she was living in March 2019. More at soledadfoxmaura.com

You can click here to order Madrid Again from Amazon.

Aaron Shulman is co-owner of the book-coaching agency Splash Literary and the author of The Age of Disenchantments: The Epic Story of Spain’s Most Notorious Literary Family and the Long Shadow of the Spanish Civil War.

Our new Books section will regularly review and report on books about Spain, set in Spain, or with a touch and taste of Spain – from fiction to non-fiction, historical to comical – plus news on literary festivals and awards in Spain. If you’d like to recommend or review a book related to Spain, please email: editorial@spainenglish.com