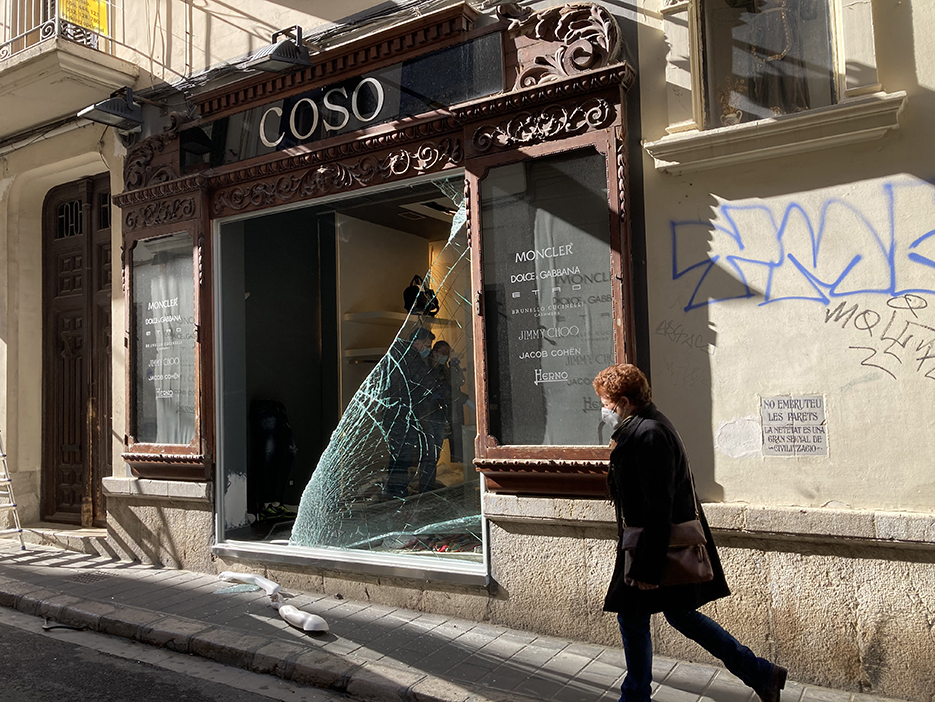 This week, the Coso clothing store in Sitges was broken into for the second time in just six weeks. The perpetrators crashed a stolen vehicle into the shopfront, smashed the glass and robbed several items of clothing.

The incident took place shortly after 2am on Tuesday, when a red BMW X6 model, with at least two occupants, was driven at speed into the shop window. Although the events surrounding the robbery took place quickly, the loud noise generated by the incident woke up neighbours – who reported the robbery to police.

In response to the call, a police patrol was set up at the Camí Capellans roundabout. However, police later discovered the perpetrators had left the centre of Sitges at high speed in the direction of Sant Pere de Ribes.

Video evidence – of the vandalism and getaway recorded by a local on their mobile phone – showed the vehicle registration plate. It has allowed the police investigation to determine that the car was stolen in the town of Fuenlabrada, Madrid, on 14 January.

The previous attack on the Coso clothing store took place on the morning of 5 February, when the perpetrators used the same system of breaking and entry. In the aftermath of the first robbery, the establishment had boarded up the storefront with wood and only recently replaced the damaged glass, which was destroyed once again by the latest break-in.

In addition to this burglary, there have been several other night robberies in Sitges over recent months. Town centre establishments such as the Zappa store and the Movistar dealership have been targeted, as well as bars and restaurants including the PicNic, the Chiringuito, la Bodegueta or Can Gregori – the latter from which the tobacco vending machine was stolen.

Sand from Port of Sitges could be the solution for beaches

Discounts at the C-32 toll gate will penalise regular users

Curfew to end in Sitges, but establishments must still close at 12.30am

Covid figures drop significantly in Sitges, but are still above previous months

Half the population of Sitges and Ribes are now fully vaccinated