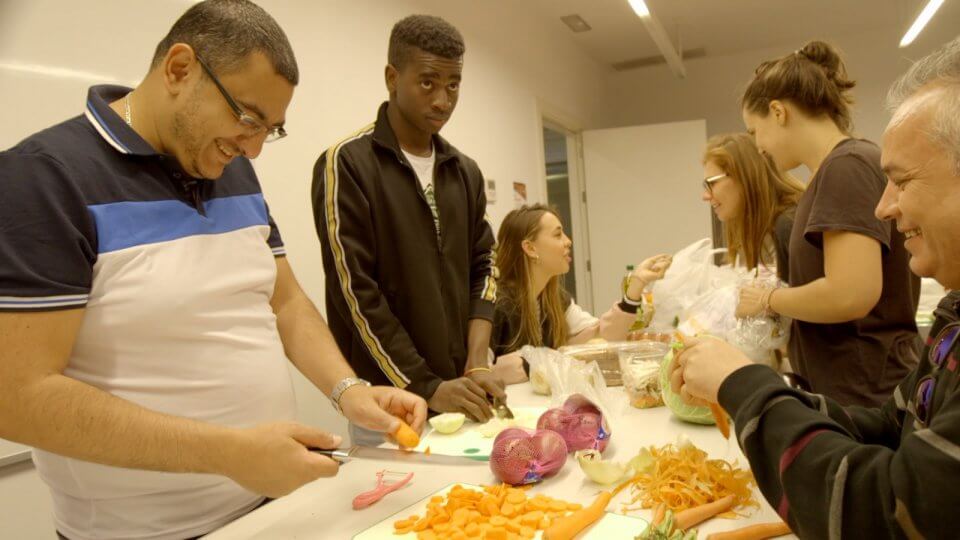 An asylum seeker’s experience can be a lonely one. Having fled persecution, displaced people so often find themselves physically safer, but socially and emotionally isolated. In Barcelona, however, a small group are trying to change that, and give something back to their local community at the same time.

Every Thursday, in the BACuinetes community kitchen in Barcelona, you will find asylum seekers sharing recipes and stories, improving their Spanish, and breaking bread. Josef, an Egyptian father of two said, ‘All memories in Egypt are related by food.’

He is in Barcelona to find a better life for his family, after they experienced violence, discrimination, and a breakdown of protection from the authorities because of their religion. Tensions between the Christian minority and the Muslim majority have been turbulent since the January 25 Revolution of 2011.

‘Here in Barcelona you can think what you want to think, live in the way you want to live. This is the community that I want my children to live in, with freedom, with a good life,’ Josef said.

As an extension of the cooking group, Josef and the other participants have decided to give something back. As well as sharing food from home with their new friends, Josef and the other asylum seekers cook food to be distributed to the homeless in Barcelona. On Saturday mornings, you will see him volunteering his time to serve food to this equally marginalised community.

Josef’s warm and sociable outlook and bright hopes for his family’s future in Spain, has led to him being the focus of a short documentary film – Recipes for Change – that accompanies this article.

The film was created by OTOXO Productions through the INto INdustry programme, which brings aspiring filmmakers from around the world together to produce social documentaries about inspiring and innovative people such as Josef.

As Jeremy Crichton, one of the co-directors of Recipes for Change explained: ‘We were instantly interested in his story because it pointed to the past, present and future of the refugee experience. He has brought his past, his culture, and his history with him – and he now shares this with others in the form of recipes, memories and food. The present is still precarious – despite improving Spanish and making new friends, he is without permanent housing or a final decision on his family’s refugee status, and so he cannot work or begin to truly rebuild his life. However, his decision to try to help others points towards a hopeful future – for Josef and other asylum seekers like him, who have so much to offer.’

At Spain in English, we’re very happy to share the Recipes for Change short film with our readers and growing audience. It also coincides with the launch of our own YouTube channel (eventually Spain in English TV) – where we aim to share, as well as create, produce and co-produce further short films, mini-features and documentaries over the coming months (as well as our videos and podcasts from the radio studio). So if you are making short films on any subject matter with a focus on Spain, please get in touch! Email us at: editorial@spainenglish.com