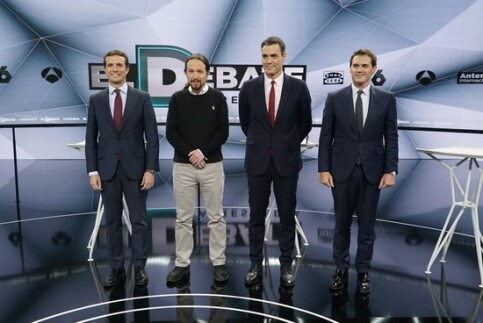 Spanish Prime Minister, Pedro Sánchez, the leader of the Podemos party, Pablo Iglesias, the People’s Party (PP) president, Pablo Casado, and the head of the Ciudadanos (Cs) party, Albert Rivera, all took part in the second televised election debate on Tuesday, this time hosted by the Atresmedia media group, ahead of the general election this Sunday 28 April.

Constant interruptions, mainly from Casado and Rivera, and with the two candidates often talking over one another, quickly marked the tone of the evening.

Casado and Rivera also clashed with one another as the Spanish prime minister looked on, at times appearing nonplussed at how his opponents were ignoring him.

Pablo Iglesias refused to join in with the bickering and instead tried to bring a different tone to the entire debate, responding more closely to the questions related to the economy, housing, employment and social services. At one point Rivera asked Iglesias if he was the ‘referee’ of the debate.

Sánchez issued a warning about the risk of ‘having these two [PP and Cs] govern with the far-right, which talks about lice-ridden leftist women and about feminist dictatorships.’

Without mentioning them, Sánchez was referring to Vox, the far-right party that could win up to 10% of the vote on Sunday. Vox was not present at the debate after Spain’s electoral authority said this was not possible due to the party’s current lack of parliamentary representation.

The issue of violence against women also proved very divisive, and the exchange of accusations between Sánchez, Casado and Rivera became somewhat personal.

The prime minister attacked the leader of the PP over his track record on this matter, and Casado reacted immediately: ‘A pretend president like Sánchez is not going to give me lessons on gender violence. I will not tolerate your finger-pointing. I have a mother, a wife, a daughter. It is an insult to say that the PP does not fight gender violence. You are using women.’

The leaders of the PP and Cs also said they wanted Spanish to be the working language in all schools across Spain in this second televised debate.

PP leader Pablo Casado added that his party would ensure there would be no ‘indoctrination’ in classrooms by increasing the number of school inspections.

The language question is a delicate issue in Catalonia, where the education system is in the hands of the Catalan administration, and where Catalan is the main working language in all schools there.

As for Cs leader Albert Rivera, who is himself Catalan, he added that his party also favours the Spanish Constitution being taught as a separate school subject.

Pablo Iglesias said the problem of schools in Spain is the lack ‘funding’, while Pedro Sánchez did not tackle the language question but pledged his party would ‘reverse’ the education cuts imposed by the previous PP government.

Both the PP and Cs parties have been critical of the Catalan government’s ‘linguistic immersion’ policies and have accused schools in Catalonia of indoctrinating students in favour of independence.

Meanwhile, in a recent campaign event in Salou, the Cs Barcelona candidate, Inés Arrimadas, vowed to impose Spanish as a working language in classrooms in Catalonia ‘so that children are not indoctrinated at school’.