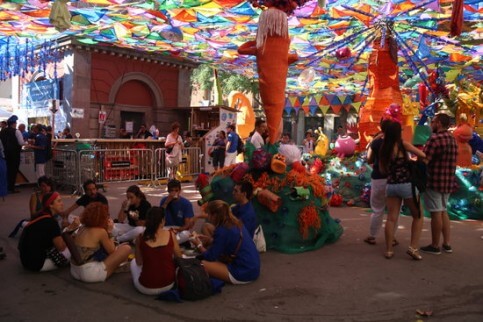 Every town and city in Catalonia has its annual summer festival, locally known as a ‘Festa Major‘. Yet Barcelona is different because while the city celebrates its annual festival, known as La Mercè, in September, its many local neighbourhoods also have their own celebrations. One of the most popular is the festa major in the vibrant district of Gràcia.

The hip neighbourhood situated above Diagonal avenue kicked off its annual celebration on Wednesday with a collective breakfast of Catalan botifarra sausage in the central Vila square. In another of Gràcia’s squares, which are interconnected by a maze of narrow streets, a magician and then a theatre company entertained young and old alike.

Perhaps the feature that most marks out Gràcia’s festa major from others in the city is the tradition of decorating the streets in different themes, although the festival in the Sants district that is just starting does the same. Joan Blanques street, for example, was decorated in a bee theme, while Verdi street’s decoration was this year inspired by Ancient Rome.

In fact, Verdi went on to win second prize in the contest to choose the best decorated street, which takes place every year. First prize went to Llibertat street, which neighbours had decorated in a rural life theme, while third prize went to Rovira square, which was turned into a dressmaker’s. In all, some 21 streets took part in the annual competition.

The Gràcia festival, which ends on Tuesday, this year includes a total of 900 different activities, from the traditional sardana dancers, castells human towers and a procession of ‘giants’, to talks and workshops on science and animals (the Festa dels Animals), a food tasting experience (Tasta Gràcia) and even a feminist activity in the ‘Dones del 36’ square.

Yet, summer festivals in general, and Gràcia’s in particular, are known for their music, with free evening concerts in the open-air. This year, the Gràcia festival included a series of folk concerts in Sol square, two days of pop concerts in the Sedeta gardens, a black music festival called Blackcelona, and a number of individual gigs around the neighbourhood.

As Gràcia’s annual celebrations come to a close, the district of Sants in the south of the city is just getting its festa major going. Beginning on Saturday, the festivities go on until Sunday, offering locals and visitors a host of activities from decorated streets, processions and human towers, to a bike race and the Piromusical event with its mix of fireworks and music.